The principle of Egz was set. Still, I had to define the graphical identity of the character, of the universe, in short, of the game. My drawing skills were sadly limited, but I agreed with myself the style would be “simple”.

Birth of an Egz Egz
Several versions of the Egz had been done and a silhouette never stopped popping up : a round shaped ball on some legs. The rationale behind this explication was dead simple : gameplay. Knowing that the game would revolve around a realistic 2D physical engine, designing a character that would be anything but round shaped would lead to too many troubles: for example, how could one throw a cube against a wall and guess where it’ll land right after that? This would have been frustrating for the player.

In addition, I really wanted the Egz to be cute and lovable. Adjusting its proportions was probably going to do the job : huge head, small legs. Several versions had been done to make it more or less expressive : big eyes, smiley face… But I wasn’t happy with the result : the eyes were working and did make the Egz expressive, but it also felt like it lost a lot of its originality. In the end, I decided the Egz would be a simple ball on legs. Or rather, two legs supporting a shell (because this is what it is in reality).

The idea of having eyes or other distinctive attributes was not dismissed altogether, but kept aside as a way for players to customize their Egz…

Creation of the Universe
One of the main problem encountered while creating the universe was that… I didn’t think about its story, and its background held in word : “organic“.

At first, and in order to differentiate it from the other games, I strongly decided against using a “tile system” level, like in “Mario Bros”. Instead, I decided I would forget about all the technical constraints and that I’d simply draw what a level would look like. 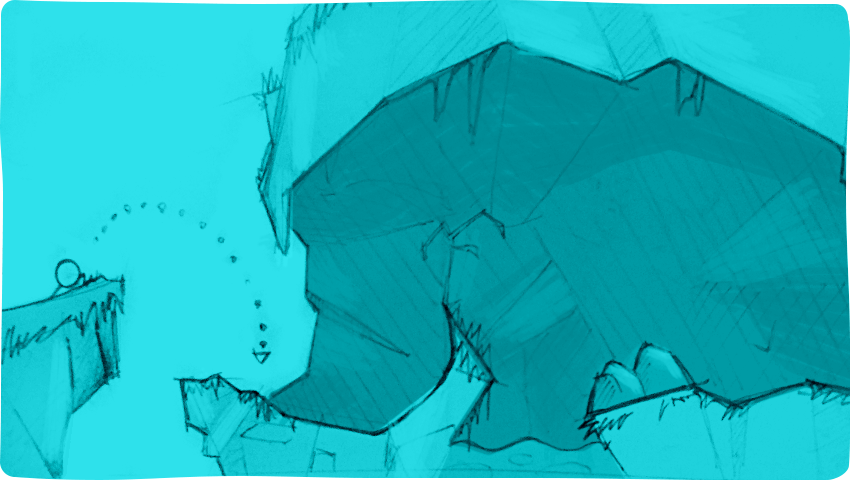 But there was still a huge lack of “style”. That world could have been in any other game. A new attempt was done, by removing details, stylizing the whole thing by using geometrical shapes. 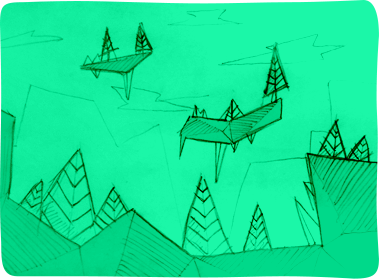 This angular / low poly style was about to become the right one. To the point where, at the time, I had it colorized, vectorized and even integrated in some kind of early prototype (lost today), developed with Flash. 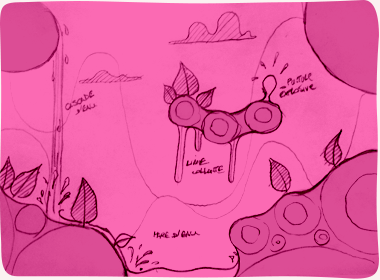 And yet, something was bothering me. The “low poly” style was beginning to be a huge thing at the time. But I was already bored with it. It didn’t feel like it had my touch. And since I was trying to do something original… Given the fact the Egz are round-shaped, the idea of drawing all the universe with curves dawned on me. I was thinking about all those games: “Worms“, “Patapon!“, “Loco Roco” or more recently: “Tiny Wings“…

Finally, the word “organic” came back and progressively made sense. I started drawing curves, rounds, and the “cell background” became more and more important.

Once the main characters set, all I needed to do was to stage everything and release a video that would allow me to get a glimpse of the future gameplay and finally use it as a demo? to search for “indie dev pals”…
09 Dec 2015

The core concept of Egz is more than basic: to control a character going from point A to point B. But for that to happen I needed a lot of time to determine in which direction I was headed. Mostunexpectedly, it’s my lack of experience which was going to define “Egz”.

Back then I was about to leave one of the agencies I was working for, which meant “less work”, “less pressure” and therefore, more “free time”. I needed to keep busy and so the idea of making a video game came naturally.

I have been a gamer since, pfew, that Christmas of 1990 when my mother bought my sister and I a Sega Master System II. I grew up with gaming consoles, computers (I even owned a Thomson MO5 at the time!), Internet, smarphones.

In short, I have been a gamer for a long while, and like any gamer I became … “picky”. I used to see mobile game as a young platform that needed to prove its worth. Especially since mobile blockbusters were differents from the games I was used to : they were more basic, with a faster pace, and easier. All those “Angry Birds”, “Tiny Wings”, “Ninja Fruits” were fun, but they weren’t the kind of game I could devote more than three hours to in total. I was used to head-shooting people on big franchise titles like “Battlefield” and “Far Cry”, to explore the underwater worlds of “Bioshock”, to hijack cars and mug prostitutes in “GTA”, and to go through “Splinter Cell : Chaos Theory” several times, or even to fill my gaps in historical knowledge with “Assassin’s Creed”. I was what people use to call “a hardcore gamer”.

This is probably the reason why my first concepts looked like this:

You control a guy, from a first-person perspective view, who can move, crouch down and interact with his surroundings in order to create diversions. The main goal is to infiltrate buildings, retrieve top secret documents and then exfiltrate. All of this while avoiding being caught by guards, which would lead to failure.

So there, this was my very first concept. The kind of game I would play without hesitating. The kind of game I had actually already played, since back in 2012 Thief was 14 years old. And after all, if this game was conceived several years ago, it meant it was now easily doable, right ? But I reconsidered. Firstly, it wasn’t an original idea. And secondly, it would mean I would have to work on stuff I couldn’t handle : building an IA, dealing with lights in order to hide in darkness, making a good FPS view (which is not that easy if you’re used to play to this kind of game), or simply making real-time 3D.

So I tried something else, maybe a little bit more original:

You’re leading an army of tiny creatures. With the help of the mouse and keyboard, you can move them one after the other and order them to attack the enemy army with rocket launchers, grenades and other funky stuff.

Seems like redoing “Thief” wasn’t enough, I had to do “Worms” (NB: with the exception of “Duke Nukem 3D” and “Battlefield 1942”, I had never spent so much time playing a demo disc). So, for the same reasons as before, I buried the idea.

I decided that there wouldn’t be any AI. There would be only a main character and his universe. Because this involves less work.

Eventually, the idea of releasing a mobile game came to my mind because I still nurtured this unsupported belief that developping a game for a smartphone is much easier. If you’ve ever developped for tactile devices, you’ve probably giggled just like I did while writing this. Automatically, I went from a mouse / keyboard combos to… a gentle stroke on a screen.

Just like probably 80% of “indies” who are starting, I was about to make a basic platformer game. Anything else would be too difficult for me. Despite of that, I still wanted it to be original. From a graphical point of view, and a gameplay point of view. So, I made a list :

The core-concept of “Egz” (its name wasn’t defined yet) saw the daylight : it would be the unexpected mix of a platformer and a… mini-golf game. A colorfull and cute game, where you’d control a character with a one gesture (no virtual joystick!), that you have to lead to his “hole”.

Later, subtile details would be added : each collision would cost health points, differents obstacles would appear in differents levels, each death would be… permanent (almost). On this basis, I would write the first draft of the gamedesign document (78 pages with a lot of images and white space…).

The main goal was to make a “target render”, a video that would show all those ideas and could give an idea of what the game should be. But before all of that, I had to start crafting the universe of Egz.
02 Dec 2015 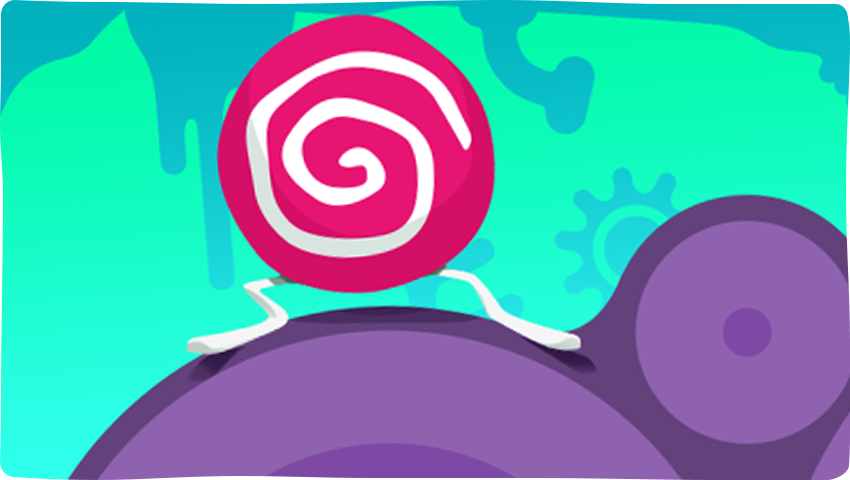 My name is Evans, I’m 31 years old living in Paris, and for more than a year now I’ve been trying to make a childhood dream come true : making my very own video game. Its name is “Egz” and here is the announcement trailer!

Making a video game is not easy for me, simply because this is not my job. I used to be an Art Director in digital communication. I was paid to conceive campaigns, design websites, mobile apps, advert games, newsletters, banners, Facebook and Twitter posts. I’ve even had several opportunities to work for interactives terminals, or CD-ROMs.

my skills were limited

I used to spend 90% of my time working on Photoshop and Illustrator. Sometimes I had to work with Flash in order to do some animations. On occasion, I had to… code. But once again, this wasn’t my job at the time and my skills were limited.

One year ago, I stopped doing any of that : I stopped working ‘for real’ for many reasons you don’t really need to know about right now. Unemployed, I was able to devote my time to this hobby which became my new full-time job and I started working seriously on my very first game, because this is what I wanted to do.

I do love my job, despite the pressure or the “people” but once out of work I found I had only one need : to dive in those fictionals universes which were sole products of the mind, to discover what other people had imagined and then turned into tangible interactive experiences.

So there I was. I started working alone, in the darkness. Like a lone wolf. Or like a lone wolf wearing underpants. It would have to be a mobile game, because it’s a well known fact that mobile games are easier and faster to make. Or so they say.

On this blog, you’ll follow the creation of a mobile game by a guy who doesn’t know much about it and who can struggle with it. But there is one thing which turned out to be true : making a game can sometimes be as fun as playing it.